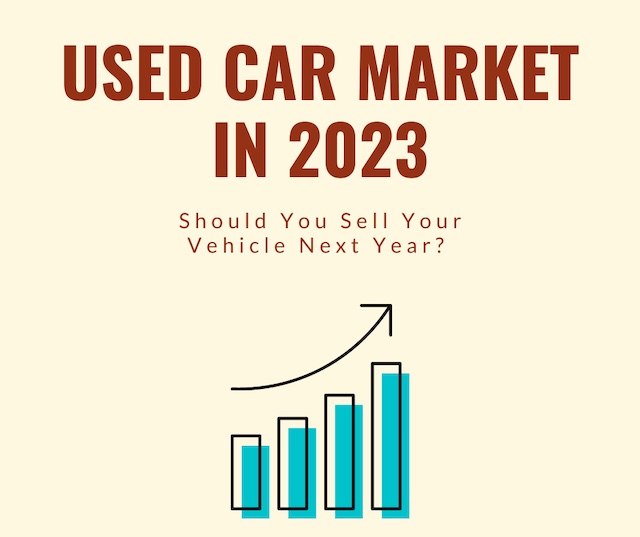 Oftentimes, when someone decides to move on from their used car, it’s a simple and immediate action. They need to sell their vehicle as quickly as possible, using the garnered cash to move on to a new and exciting ride. And, in that case, we entirely get it. If you have your eyes set on something exciting, or just need immediate funds, you may not be looking into the used car market before selling your car. You may not be worried about when is the right time to move on from your vehicle.

If you are on the more patient side, you may be twiddling your thumbs, waiting for the perfect time to move on from your used car. Unfortunately, dictating and projecting the used car market has been nearly impossible. The pandemic (in which we shall not name) changed the used car market for multiple years and potentially beyond. Average used car prices jumped over 40% from January 2021 to 2022. It’s been a rough go for those in the business, and the future is murky again.

What does 2023 look like for used cars? Should you plan on selling your vehicle for significant profit next year? Let’s discuss.

2022 was a weird year for the used car market. In fact, the last three years have been weird for every market.

In the middle of 2022, some used models of vehicles were more expensive than their new counterparts. No, really.

When the supply chain shortages began, car manufacturers took a huge hit. Overall, the lack of chips was the biggest factor striking the car industry. Production of a lot of vehicles screeched to a halt. This lack of production along with raise in demand skyrocketed the price of used vehicles. Used vehicles then became extremely expensive. While the used car market rose, the new car market was put on pause. Ultimately, the price of used cars exceeded that of their normal new sticker prices. Now that the manufacturing of vehicles has increased, more new cars are hitting the market. But, their sticker price has not increased.

As we said, we saw a 40% increase in the average cost of used cars. This continued to drop throughout the year, sure, but even a 10% decrease would still mean 30% more than the year prior.

As a car-selling website, we kept a close eye on the market and its ever-concerning fluctuations last year. Albeit, it kept us both intrigued and busy. By the end of the year, things were beginning to plateau, creating a middle ground that was still above years prior (pre-pandemic) but significantly lower than the height of the pandemic boom (2021).

If only they knew.

For a further disheartening comparison, the average price for a used car in July 2019 was approximately $17,500.

If trends continue, prices should continue to decrease going into 2023.  In a November report, J.P. Morgan researchers theorized that new car prices were likely to fall no more than 5% in 2023 while used vehicle prices could lower by 10% to 20%.

Through the lowering of new car stock and the constant need for viable transportation, you would believe that consumers would continue to bite the bullet on the ever-growing price changes in the used car market. Fortunately for some (and unfortunate for businesses), this was not the case.

Pat Ryan, CEO of car shopping app Copilot, told Forbes Wheels, “Part of the decline is due to economic uncertainty, but it’s primarily consumer resistance to those prices.”

With prices becoming astronomical, consumers weren’t willing to budge. With a lack of new inventory, car dealerships were also not able to budge, creating a middle ground that simply couldn’t exist. In the end, consumers reign victorious, with dealerships having to hike down prices to get their inventory off the lot.

But will it ever reach the normal that it was before the pandemic? Not for a long time.

Ryan told Forbes that he doesn’t believe prices will be back to ‘normal’ until at least 2026.

So… Should You Sell?

If you are waiting for the right time to pounce on the used car market (as a seller), now might be the time. It all has to do with relativity.

There’s a psychological aspect to being a buyer in the current market. If you were waiting patiently for prices to drop, you may now believe the time has come. As we noted, we’ve seen a significant drop in used car prices since the height of the pandemic. But, as we also noted, it’s relative to the prices that skyrocketed before.

For example, a buyer may see that the price of the car they want has dropped 10%. That may be enough incentive to make the purchase. But that 10% is still 30% above what the price was before the pandemic. The 40% increase in average prices in 2021 set the market at a new high. People may believe they are getting a deal, and in relativity, they are, but even the lowest car is still higher than it was in 2019.

But if you sell a car for 30% more than it was in 2019, should you even consider that a profit? The new bar is set even higher, so is the new high the norm itself? That’s up to you to decide.

To put it simply: people are beginning to buy cars again because the prices are dropping, but they aren’t dropping enough to make selling unprofitable. Therefore, selling your vehicle before things drop too much may be a good move. If prices are projected to continuously drop through 2023, then you may want to sell your used car ASAP.

Time to talk about ourselves (my favorite thing to do).

Looking for an alternative for where to sell your used car? Tired of dealing with private messages and seedy dealerships? Don’t want to have to do research on the used car market? Well, you’ve come to the right place.

Sell My Car Colorado will buy your used or junk car immediately. One of our qualified dealers will give you an offer. If you accept, we will come to pick the vehicle up from you. Even if it is inoperable, we will tow it free of charge. You don’t have to leave your home or office.

Furthermore, we will offer you valid and fair prices for your vehicles. We also guarantee $100 more than the competition. Plus, we sell cars, too. So if you are looking to upgrade your vehicle, we can make the process simple.

1 thought on “Used Car Market in 2023 – Should You Sell Your Vehicle This Year?”