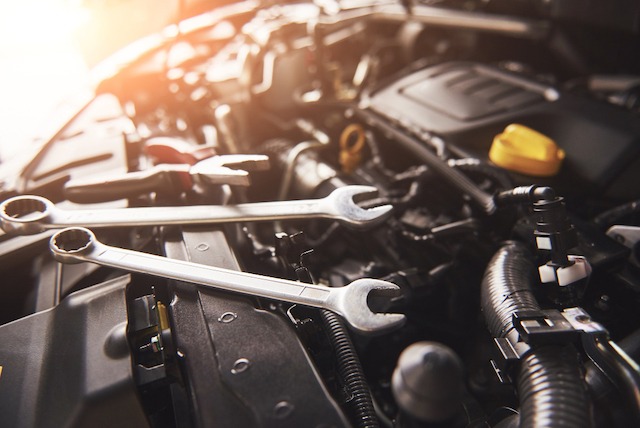 Ah, the effervescent nature of a car engine. One day it can sound as beautiful as the whirling hum of modern machinery, and the next, a pack of hungry hyenas squealing and laughing throughout a savanna. Car components can be a fickle thing (especially engines). Even the most durable of vehicle models will find themselves with mechanical issues eventually. But while small performance or visual cues may not alert the average vehicle owner, engine noises surely will.

We can preach the concept of getting any car issue fixed immediately, but we understand this is not always possible. We live in an expensive time, and vehicle problems can be the least of your priorities. But what engine sounds require immediate attention? What noises should cause you to get your car off the road right away?

You don’t need to be an expert mechanic to own and operate a vehicle, but you should know and recognize engine noises you should never ignore. Here they are.

A clicking sound may be the least alarming of the engine noises listed here, especially if your mechanical knowledge is less than par. It is not an extremely loud or concerning noise, with the concept of ticking often related to small annoyances (like a nuisance tapping a pencil on a desk).

If your engine is making a ticking sound, it can be easy to pass over or drown out with a cranked stereo. But it’s on this list, so it’s something that should not be ignored.

Firstly, the most common cause of engine ticking and clicking is a lack of oil. While this can be an easy temporary fix (putting it at the backend of the list), it can still be an indication of serious and long-term issues with your car’s functions. Secondly, if the problem is simply a lack of oil instead of an oil-leaking problem, then immediate attention is still needed.
Driving a car with no oil can quickly destroy the engine.

While clicking often means oil problems, it can also be symptomatic of other issues. These engine noises can mean that there are issues with valvetrain function, which controls intake and exhaust valves.

Furthermore, if you hear the noise while turning, your CV joint could need grease. The CV joint works to lubricate the front axels.

Squealing and whining are never good sounds, even if it is not coming from your car. Is someone hurt? Is an animal attempting to be obnoxious? Did someone scream at the sight of a spider?

Squealing tends to be the biggest cause for concern amongst untrained ears. We are subconsciously trained as a species to be aware of high-pitched wailing. Fortunately, squealing isn’t the worst possible noise your engine can make, though it should not be ignored.

The most common cause of squealing is a worn-out serpentine belt. Consequently, this belt helps control the functions of the alternator and water pump. Henceforth, the belt is crucial for a plethora of vehicle necessities. If your belt is about to go, it’s critical to get it looked at immediately.

If the squealing is not coming from your engine, other problems need attention (obviously). Most commonly, squealing in the front of the vehicle is related to steering issues or brake pad erosion, both critical aspects of a vehicle’s functionality. If you hear the squealing while stopping or turning, then it may not be an immediate concern, but it should be looked at.

If you hear the sounds of an angle grinder as you are driving or idling, something is very wrong. Grinding metal is more than just an issue for your ears. It also indicates an array of problematic vehicle occurrences. Furthermore, if the grinding is specifically in your engine area, something has worn down to the nitty-gritty.

Usually grinding metal indicates that a car’s brake pads have been worn down to the metal. This means no more brake pads. What could go wrong? While engine noises can mean detrimental things for a vehicle, brake noises can mean detrimental things for a driver. Don’t play around with worn-out brakes. If they are grinding, you are past the point of squealing and therefore past the point of immediate attention.

If the grinding is in your engine while driving or idling, it’s probably worn bearings. This symptom can lead to a host of other problems, ultimately destroying the entire engine. It’s something to get checked out ASAP.

Excuse the onomatopoeia, but it’s the only way to describe the ever-concerning bang that can occur under your hood.

Does your engine sound like it’s popping off fireworks during a Fourth of July celebration? Yeah, something is wrong. If your car is not jacked-up for use at the local racing track, then loud popping should never happen. If it does, then your engine is backfiring. Henceforth, it’s as bad as it sounds.

Ultimately, there are a wide array of reasons that an engine may backfire. Unfortunately, none of them are good. A loud pop means that fuel wasn’t burned in the combustion chamber, escaping into the exhaust system. We won’t take the time to list and describe every possible cause of an engine backfire, but know that it is one of the worst engine noises.

From bent valves to incorrect spark firing orders, something is going awry with your vehicle if it backfires. Backfiring can lead to further damages, some unfixable. If you hear a loud firework in your car (and it’s not some sadistic prank), tow it to the nearest shop immediately.

1. Knocking Is Not King

It feels odd to be counting down the top-five engine noises as if they are positive awards. The number-one honor should not be seen as such. Though we joke, a knocking engine is far from one. Knocking is our number-one worst engine noise! Congratulations!

Overall, a detonation knock means that the fuel and air mixture is detonating at numerous locations simultaneously. This event can be caused by a variety of problems, from simply the wrong fuel to extreme damage. If your car is a knocking, it’s time to get flocking (to your nearest mechanic).

Knocking can also indicate a rod knock, which means certain parts of the engine have worn down to an unhealthy degree.

No, really. If your engine is knocking, stop driving it and get to a mechanic as soon as possible. It could be a simple fix, or it could be detrimental. Driving a rocking engine will only make matters worse.

The Worst Sound: No Sound

Unless you drive a snazzy new electric vehicle, your engine should make some type of noise. After all, it’s a mechanical wonder with a bunch of firing and moving parts. It should make noise.

A non-electric car that isn’t making noise means that it’s not running. What could be worse than that?