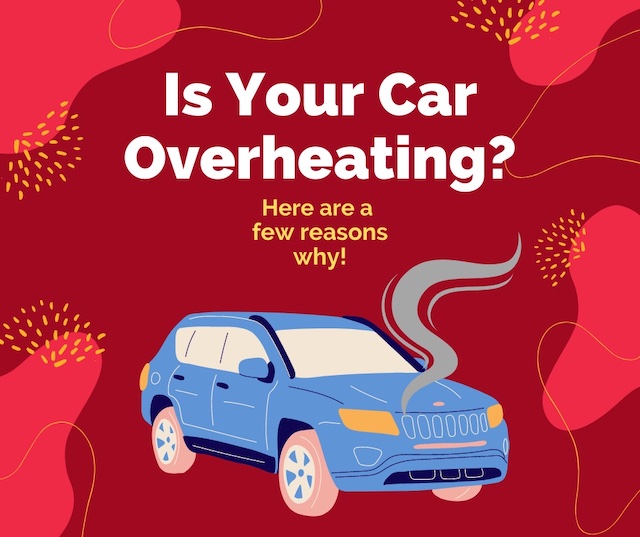 An overheating car can be one of the more visceral and alarming mechanical issues. Smoke or steam rising from your hood is often seen with pulsating hearts. But is it the end of the world? Why is your car overheating and is the issue going to cost you an entirely new mortgage?

On one side of the coin, the overwhelming array of causes can be seen as a positive. Some of the possibilities are simple fixes. On the other hand, the more possibilities, the harder it is to pinpoint the cause. Regardless, we will break down the five most common causes of your car overheating.

How to Know Your Car Is Overheating

The first step in understanding a cause is to understand the effect. If you don’t know how to identify an overheating car, you may be a bit blind.

All jokes aside, recognizing a car rapidly reaching its tipping point is fairly easy. The biggest signs are:

What Should You Do?

When you see a pillar of smoke rising from your engine, your first reaction should be to pull over. If you decide to drive through the smoke, clearing the way with an influx of speed, you are truly living on the edge.

Other symptoms, like icon blinking or weird smells, may cause some hesitation. What should you do when you notice your vehicle is overheating?

Firstly, pull over. If you run your vehicle too hot, it can permanently damage your engine. That’s not a cheap repair (if it can be repaired at all). Once stopped, turn your vehicle off to prevent more damage.

It’s important to note that you can’t always pull over. If you are in a situation where there is no place to stop, don’t panic. Do not force a stop on a road without a shoulder. Take a breath and drive slowly, allowing air to circulate under the hood. Put your hazards on and get to a stopping point as soon as possible. Don’t choose your vehicle’s safety over your own.

If you still have to move while overheating, turn the car’s heat on. No, really. Turning on the vehicle’s heat will help pull the hot air from the engine.

Once stopped, open all of the windows, turn the engine off, and call for help. If you aren’t mechanically inclined, don’t attempt to address the situation. Reach out to someone like AAA to receive professional assistance.

Once you pull over, you may be eager to pop your vehicle’s hood. A terrifying weight of anxiety can sit on your shoulders. You want to see the extent of the damage, after all.

If the vehicle has been running at extreme temperatures, the coolant system can be at brutal temperatures, causing pressurization. It’s important to avoid attempting to open these things, which could lead to serious injury.

Let’s get to the main point: what are the reasons that your vehicle is overheating?

As stated, there are a plethora of different reasons. We will attempt to categorize all possibilities into five significant categories. Of course, there will be some reasons we skip over or miss. Automobiles are complex systems. So many different things can go wrong.

1. Your Thermostat Is on the Fritz

Your car’s thermometer does more than just read you the temperature. It acts as a signifying unit, much like the thermostat connected to your home’s air conditioning unit. When it reads too high, it signals coolant to cool the system.

If your thermostat goes up, your vehicle’s coolant system can quickly go out of whack. It won’t know that it needs to control the higher temperatures, leading to an overheating engine. Luckily, this is just one fixable issue that will put all the correct pieces back into place without further repair. It’s often one of the cheapest repairs in regard to overheating.

Without the captain telling the team what to do, the team will do nothing.

2. No Coolant, for Some Reason

Coolant is used to… Well. Cool your vehicle during operation. It’s a vital part of an automobile’s mechanics. Without it, your car can quickly become dangerously overheated.

An engine’s combustion chamber can reach up to 4,500 degrees Fahrenheit. The cooling system works to draw the heat away from the engine, cooling it past unfathomable temperatures. Without proper functionality, your car will quickly overheat.

Having the wrong coolant for your vehicle, a leak in the coolant system, or a loose coolant hose clamp can all lead to cooling system issues. Furthermore, coolant will lower naturally over time. Make sure your fluids are always topped off with the correct materials.

Burning coolant was the sweet smell we spoke of earlier. It will also produce a visual vapor if leaking near the hot engine. Keep an eye and nostril out!

Pushing off an oil change or neglecting to check your oil level is human nature at this point. We all avoid it, living lackadaisically through the common trope of ignorance and bliss.

Oil works to lubricate the moving parts of the engine. The less lubrication, the higher the friction. Friction creates heat, especially during drastic movements like that of a speedy engine. Therefore, if your car is lacking oil, the unlubricated engine is likely to overheat.

It’s nearly impossible to pinpoint why your vehicle is missing oil without being physically present. From a leak to just a lack of observation, oil can be missing for a variety of reasons. Even just lower oil levels can cause your engine’s temperature to increase.

Consequently, if you are missing oil, other negatives can occur within your vehicle. It’s not always just overheating. This situation should not be overlooked.

Furthermore, leaking oil can be the cause of smoke from your hood. If oil burns off on the hot engine, it can create blue or gray smoke.

Lions and tigers and bears. Oh my!

There’s a lot of belts, hoses, springs, and caps in your vehicle. There are a wide variety of these minuscule parts within your car’s cooling system. But, regardless of size and price, their value cannot be overstated.

If you have a blocked coolant hose, a wornout belt, or a busted cap, your coolant system will not function properly. If a coolant system isn’t functioning properly, then your engine is likely to overheat (duh). Like causes of oil leakage, it’s hard to pinpoint which piece is malfunctioning in the cooling system. Just know there are a lot of options.

A messed up hose can even lead to a lack of coolant. Double whammy!

The final of the most common reasons for your car overheating is the lack of a functioning water pump.

Yes, your car has a ton of different fluids moving through it.

Notice that the coolant is running through a bunch of different hoses and belts in this process, further pushing the point of the last subject.

If the water pump is damaged or broken, it will not push the coolant through the cooling system properly. And, if you haven’t noticed by now, no coolant means overheating.

A water pump issue can result in steam rising from the front of your car. It can also lead to a coolant leakage.